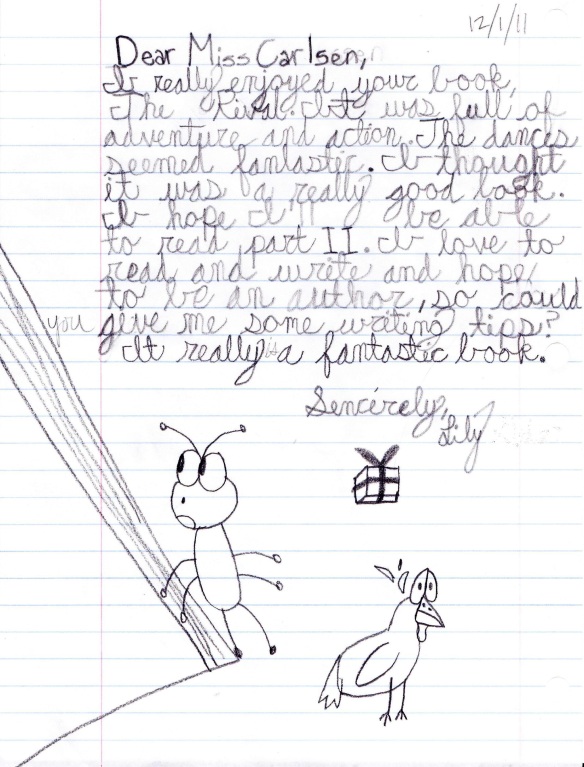 If you want to know how to make my day, this is it! A big thank you to Lily from Utah for the best fan mail yet. Lily will be getting a complimentary advance copy of The Emissary (Part II of Bex Blixen and the Electroleviathans), due to come out late 2012-ish. And yes, her reply, complete with some writing tips, is in the mail.

And now for something completely different: Tis the season to give eBooks. And since that’s kind of new, here’s a great tutorial on how.

“I didn’t like it. A lot of action… but too much for the amount of plot. I got tired reading it.”

It’s true, Bex Blixen is no damsel in distress. She’s out to kick some ass. So there you have it folks: not everyone loves The Rival.

But if you do, please vote for The Rival as a 2011 YA Fiction Goodreads.com book of the year. Voting closes Sunday – tomorrow – at midnight!

I’m so grateful for the reviews I’ve gotten for The Rival. Thank you, thank you reviewers. Here’s one that really knocked my socks off!

“The Rival, the first in a series, is an astonishing teleport into an imagined world.  Author Bethany Carlson has invented a plausibly magical alterna-reality in which the (mostly teenage) characters must be their best selves to vanquish evil. There are echoes of Narnia and other classics but the subject matter and narrative are entirely the author’s own creations.

Downside: It’s a trilogy. I have to wait to find out what happened!

This is a young-adult book, but totally enjoyable for no-longer-young-adults as well.  Can’t wait for the sequel!

Wow! Would you like to read The Rival for free? Just drop me a line at bethanyjoycarlson@hotmail.com and tell me what kind of ereader of you have (if any). I would love to have a few more reviews before the official launch! And, if you have an iPhone or iPad, rating The Rival would be a big help for me. Unlike the other platforms, iTunes won’t show a rating until a (mysterious) number of ratings have been posted… and it looks like I need more.

While I try not to let the rejections go more than skin deep, praise goes right to my head. A real review from a real new reader of The Rival:

The Rival on Amazon

Miss Peregrine's Home for Peculiar Children by Ransom Riggs
My rating: 3 of 5 stars

X-Men meets Geek Love is a pretty cool starting point for a story! Which is why the execution is disappointing. Great premise, intriguing characters, clumsy plot. A fast and fun read that is ultimately not totally satisfying.

View all my reviews